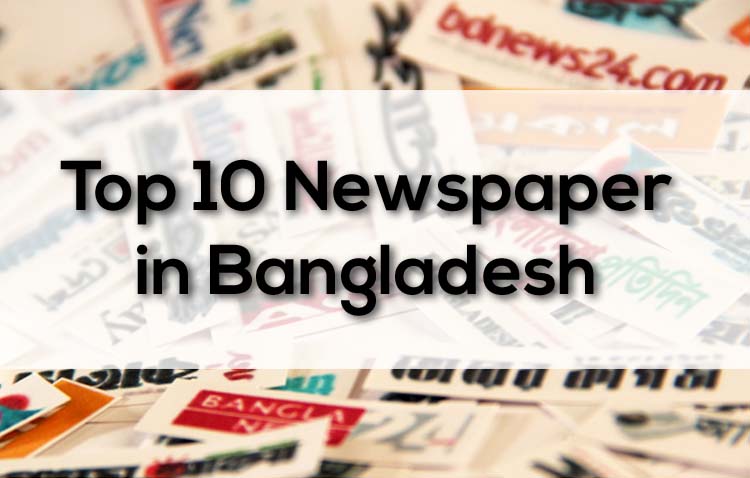 Newspaper is a very important part of day or day life- That’s what we have been learning from childhood, nothing new with that. With time passing by, Newspapers have become more available and earned more popularity. Nowadays newspapers have become much popular as we can read them online too.

So the number of readers of newspapers is just increasing day by day. Some are reading newspapers holding in their hands, and some others are reading it online. But somehow we all depend on newspapers to get to know the daily happenings around the world. There are mainly two versions of newspapers in Bangladesh. One version is printed in the English language and the other one in Bengali. Let’s see the combined list of Top 10 newspaper in Bangladesh.

“Prothom Alo” is in the top position among all the Bangladeshi newspapers. According to the circulation number, it’s the second-largest newspaper of Bangladesh. It is the highest-rated and most popular printed newspaper in Bangladesh too.

The Prothom Alo was first published on 4th November 1998. The name of the editor and publisher of this newspaper is Matiur Rahman, who is apparently a journalist.

The online portal of “Prothom Alo” is the most visited and most popular Bangladeshi website throughout the world. Their Facebook Fan page has got 6.75 million followers, which is the largest number here. The circulation number of this newspaper is 5,01,800.

People like “Prothom Alo” most as it never does partiality and expresses the true news only. And moreover, they publish the news in unique ways. The most loved part of this newspaper is it’s editor’s column which analyses the most recent issues thoroughly. That’s why more than a million people read this newspaper every day. You can visit the web address www.prothom-alo.com to know more about the newspaper.

The headquarter of this newspaper is in Pragati Insurance Bhaban, 20-21, Kawran Bazar, Dhaka.

The Kaler Kontho is one of the most read and rated newspaper in Bangladesh. It’s printed in Bengali version. This newspaper is owned by the East West Media group. It was founded on 10th January 2010.

The name of the editor of this newspaper is Md. Imdadul Haque Milon, a well-known novelist of Bangladesh and the publisher is Maynal Hossain Chowdhury. Their circulation amount is almost 2,90,200. The number has made them attain the position of the second-most circulated daily newspaper of Bangladesh.

The address of the newspaper’s Headquarter is Plot no-371, Block-A, Bashundhara Baridhara. Their web address is www.kalerkantho.com

The Daily Star is the most popular newspaper printed in English version in Bangladesh. It is the mostly sold English daily newspaper. And also, it’s the leading English newspaper of Bangladesh. Their circulation number is 44,814 now approximately. Syed Mohammed Ali founded this newspaper on 14th January, 1991. The motto of this newspaper is “Committed to people’s right to know”. People of all ages get attracted to this newspaper as it publishes various kinds of quality content. The authority maintain a very wonderful structure to publish news with the perfect search and examinations.

Mahfuz Anam is both the editor and publisher of the newspaper. Mediaworld company own this paper.

The address of their headquarter is 64–65, Kazi Nazrul Islam Avenue, Dhaka. www.thedailystar.net is their web address to read the newspaper online.

This newspaper was founded on 16th March 2010 by East West Media Group (Branch of Bashundhara Group). The editor of this newspaper is Naeem Nizam, who is a famous veteran journalist. And Moynal Hossain Chowdhury is the publisher.

Their permanent address is Plot -371 / A, Block-D, Bashundhara Residential Area, Baridhara, Dhaka. The web address to read this newspaper through online is www.bd-pratidin.com

It’s one of the oldest and most popular newspapers in Bangladesh. Since the year of 2000, it never disappointed the common folks and kept expressing their thoughts through the writings. That’s why people of rural areas read and like this newspaper most. “Ghore Baire”, “Shahityo Shamoyiki”, “Prokriti o Jibon” etc. are some more popular features of this newspaper.

It’s another popular newspaper in Bangladesh, which was published for the first time on 21st February 1993. Janakantha Shilpa Paribar owns this newspaper.

The meaning of this newspaper’s name is ‘Voice of People’. The name isn’t wrong as it actually brings light for the hope of people by expressing about their wishes, sorrows, and sufferings in the newspaper. Though it’s an old newspaper, hasn’t lost popularity in all these years. Moreover, now it’s published online too. You can read their online version on www.dailyjanakantha.com

The name of the publisher of this Mohammad Atikullah Khan Masud. He is the editor too. This newspaper gets printed for more than 2,75,000 copies every day.

Their web address is www.ittefaq.com.bd and Address of their headquarter is 40, Karwan Bazar, Dhaka.

“The New Age” was published for the first time in June 2003. Media New Age Ltd. owns this newspaper. The name of the editor is Nurul Kabir.

This newspaper is mainly popular among youngsters. The journalists of this newspaper write on various issues very attractively. There are examples of this newspaper of making a positive change in the mindset of people living in society. This newspaper has gained popularity in no time as it connects the people with the government very magnificently through its writings. You can read the newspaper through online too by visiting www.newagebd.net

The address of the headquarter of ‘’The New Age” is – Holiday Building, 30, Tejgaon Industrial Area, Dhaka.
The circulation number of this newspaper is almost 38,600.

The Daily Samakal was first published on 31st May 2005. Mustafiz Shafi is it’s editor’s name. Times Media Limited and Ha-Meem Group own this newspaper and A.K. Azad is the publisher of this most read newspaper of Bangladesh. The circulation number of this newspaper of every day is almost 2,70,000.

The newspaper gets adapted according to the aspirations of readers and that’s why it’s very popular among the readers. The name “Samakal” in fact presents the Motto of the newspaper which means “Of Present Age”.

Their headquarter is in Dhaka. And the web address to read this newspaper online is www.samakal.com

The famous newspaper ‘’Naya Diganta” stands for the meaning “A New Day”. This newspaper brings light in the lives of the readers by letting them know about what’s happening around the world. It tries to be impartial while publishing news. The newspaper authority prints about 90,650 copies everyday.

The newspaper was founded in 2004. Diganta Media Corporation own this newspaper. The publisher of this popular newspaper is Shamsul Huda and Alamgir Mohiuddin is the editor’s name.

Their headquarter is in 1 RK Mission Road Manik Mia Foundation, Motijheel, Dhaka.  By going through www.dailynayadiganta.com, you can read their online version.

(*The circulation numbers are collected from Wikipedia)