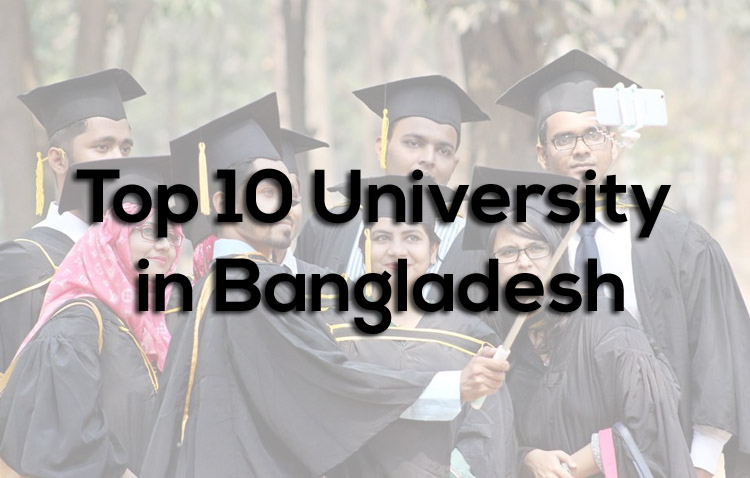 Students always keep worries about their admission test and career choosing. Today I am going to talk about the most important part of a student’s life. Are you thinking what I am thinking?

I am mentioning the names of Top 10 University in Bangladesh

Dhaka University is the oldest Public University in Bangladesh. Famous entrepreneurs, economists, leaders, linguists, writers and many more passed from this university. Such as Noble Peace Prize winner Muhammad Yunus is also an alumnus of Dhaka University Nowadays our generation gets attracted to online classes. In that case, I have to take the name of Ayman Sadiq because he has bought the online based study in Bangladesh.

As I was talking about Ayman Sadiq then you might know that he is from the IBA department. Well, to be very specific Dhaka University is famous for its IBA. Most of the Faculty Members of FBS including the alumni are the influential persons of the Corporate World of Bangladesh. Some alumni who are such notable and this indicates Dhaka University as the most influential institution too.

BUET is an eminent Public Engineering University in Bangladesh. It mainly focuses on engineering subjects. Only the students who have a science background and a good GPA can apply to this institution. Yet, this is the oldest university for Engineering subjects and Architecture. Architecture department of BUET is just unbeatable with another varsity. Around 1055 students get accepted to their undergraduate programs after a competitive admission. Students from science background always dream of studying here. The bonding between alumni and students is noticeable in this institution. Besides studies, BUET encourages extracurricular activities and student’s interest. Famous engineers, architects, writers, even singers and many more passed from this university.

BRAC University founded as a branch of the BRAC organization by Fazle Hasan Abed in 2001. It’s another non-government university. Its permanent campus is in Mohakhali. This institution has a residential campus which is in Savar. They take the students there to groom up and to furnish their ethical corner. BRAC University students directly participated in BRAC Onnesha launched on 3 June 2017. Moreover, the alumni of BRAC University are working in Different reputed multinational companies. Then again, BRAC University has different types of clubs. Such as Language club, Sports club, Cultural club and so on. These clubs help the students to work on their interests. Especially, BRAC University is eminent for their CSE, BBA & Architecture departments.

Chittagong University is a public research university with multidisciplinary faculties. Besides, it has a 2110-acre hilly landmass in Hathazari Upazila. It is 22 kilometers North of Chittagong City. This institution established on 18 November 1966. Especially, this varsity has the 2nd largest campus among other universities in Bangladesh. It consists of 24,000 students and more than 1000 faculty members. After a competitive admission test student gets a chance here in undergraduate programs. Moreover, it has a variety of subjects and many new subjects. It is to say that Chittagong University is famous for its beautiful campus with greenery.

CUET is a Public Engineering University which is in Raozan Upazila, Chittagong District, Bangladesh. Furthermore, It is counted as 2nd engineering university after BUET. It is consist of fifteen academic departments under five faculties which emphasize teaching and research of engineering, technology, architecture & planning. Students get accepted to their undergraduate programs after a competitive admission. Only the students who have a science background and a good GPA can apply to this institution. Besides, Student is awarded Honors if he/she obtains CGPA above 3.75 or higher and awarded Chancellor’s award if CGPA is 4.0. Moreover, this institution has a huge beautiful campus.

AUST is a leading Private Engineering University in Bangladesh. At first, they used to offer only the engineering subjects but a few years before they have started their BBA department. Though it’s a non-government university, they take their admission test in the same way government universities take. In contrast, they take the lowest amount of tuition fees among other private universities. Students get accepted to their undergraduate programs after a competitive admission. As like other private universities, they take 3 seasons admission test in a year. It has a beautiful campus in tejgaon. Ahsanullah University of Science & Technology has different types of scholarship system for its talented students.

Islamic University of Technology (IUT) is one of the leading and prestigious engineering research institutions in Bangladesh. It is an international university which is directly run and funded by OIC. IUT is at Board Bazar, Gazipur, about 30 kilometers north of Dhaka City. Only male Muslim students were eligible to apply but from 2006, female students can also apply here. IUT authority only selects Muslim students by judging their results in secondary and higher-secondary level and admission test. They refer students to other international universities for their internship. On the other hand, IUT has a beautifully designed and architecturally developed campus.

Though the university’s progress can’t give success to a student, only a student can determine his/her success or progress. These Top 10 Universities in Bangladesh can give a student proper Education.
Don’t let rumors hit your opinion. Before you take a decision, gather more and more authentic information about it. And the level of authenticity will depend on you. Because it’s you who will go through that path.
Follow your passion. Let it drive you towards your desire.